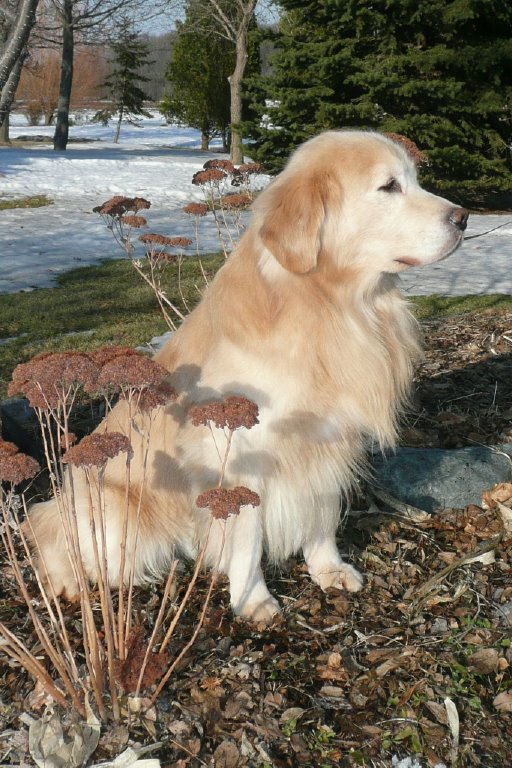 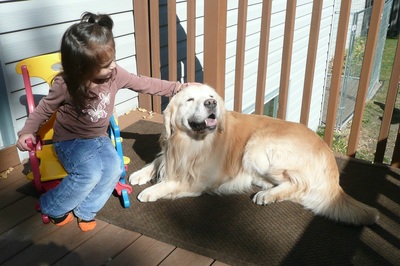 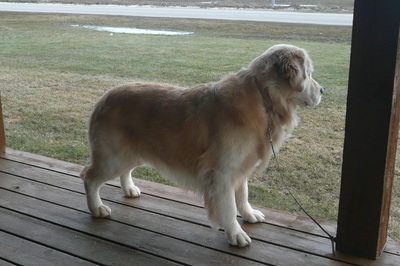 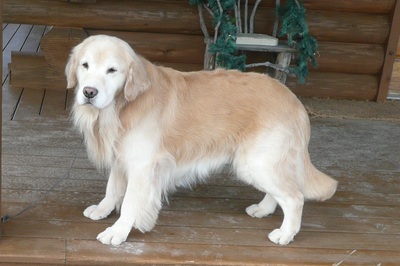 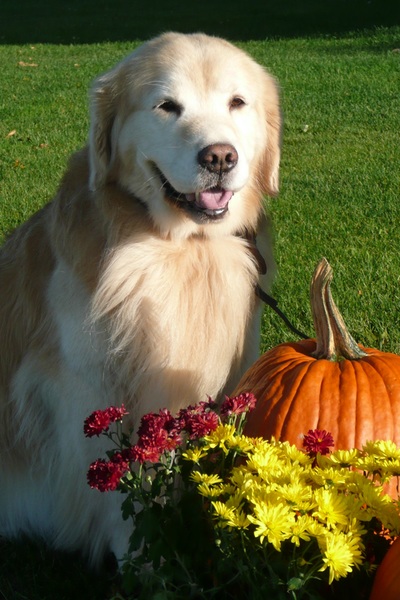 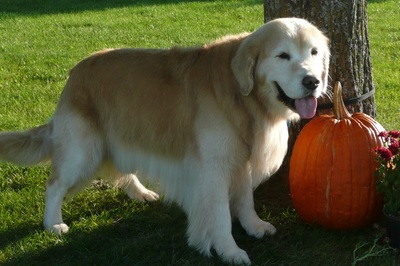 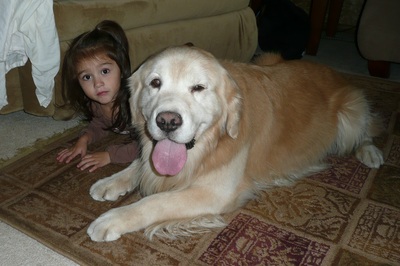 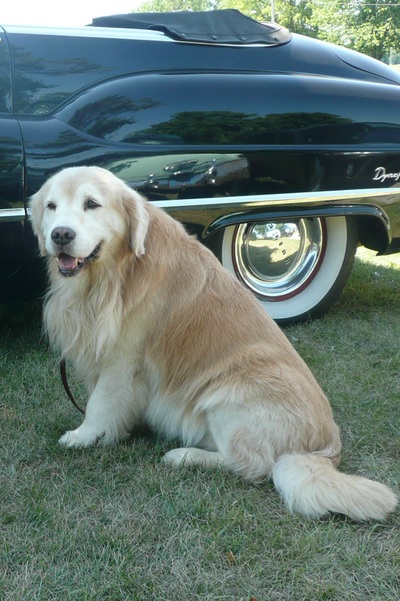 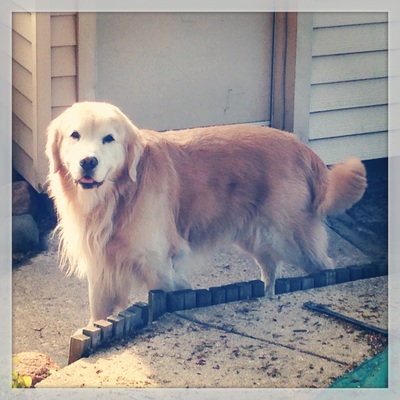 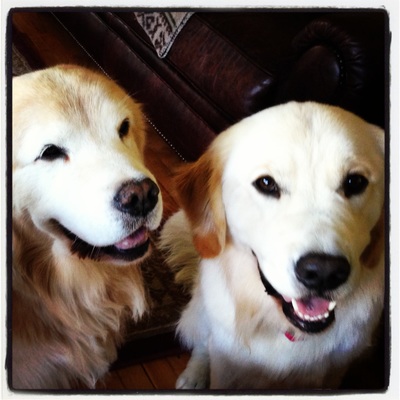 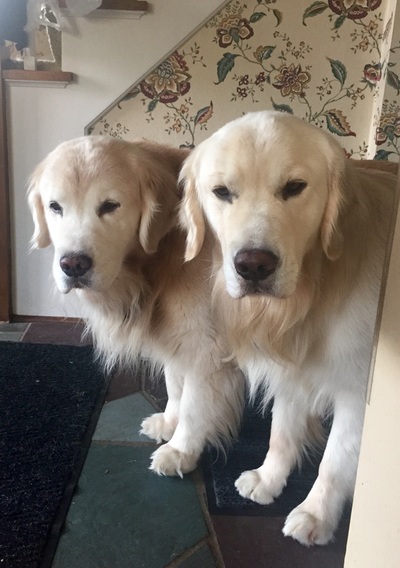 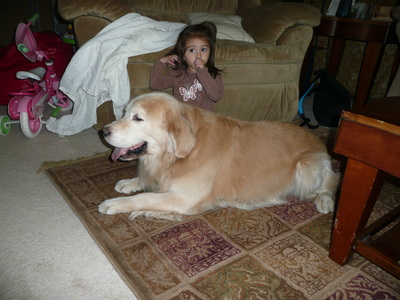 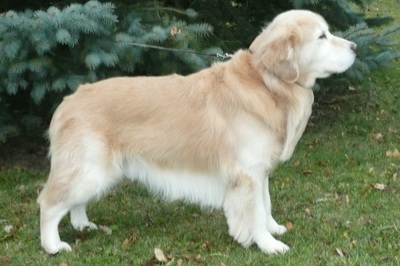 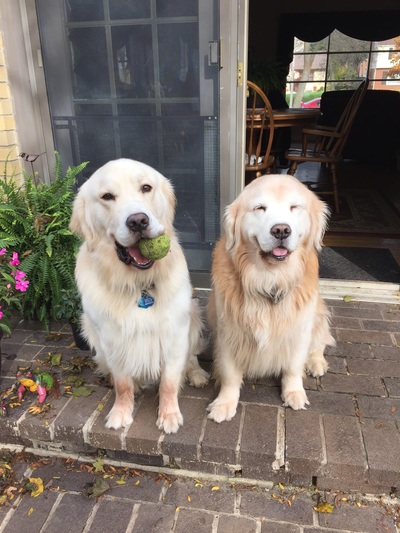 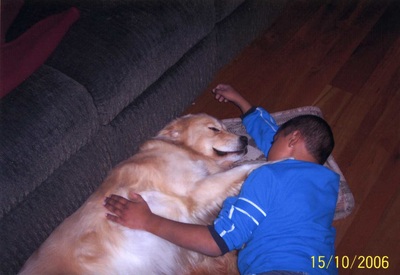 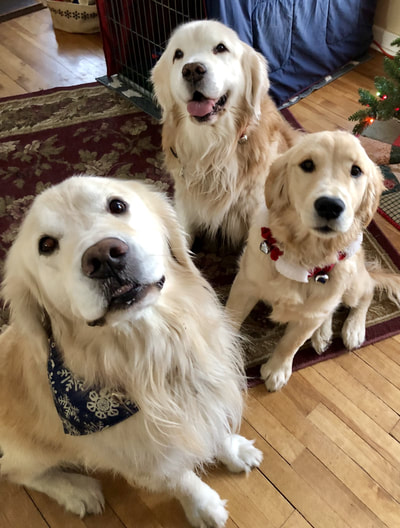 Timber is a medium/light golden with a straight plush coat. He is very large boned with big, blocky head. He weighs 78 pounds. He has excellent pigment, a good bite and has nice structure. Timber is our “big, teddy bear!” He is very laid back and is extremely lovable. He was a favorite among our foster sons!
Timber has earned his Conformation Certificate Assessments (which states that the dog is judged to be correct by certified judges) and has also earned his Rally Novice title. Timber loves to retrieve and swim.
I purchased Timber from Starlet Heavner and Brenda Hux, breeders in North Carolina. Timber comes from a strong line of American and Canadian Champions and is certainly evident in his looks!
Timber makes his home in Milwaukee with the YoungEagle family and visits our home when his services are needed. He walks every day with Tim, rain or shine! Here is what they write: TIMBER
Timber is a gift from God – a one of a kind masterpiece of His creation!
From the moment you set eyes on Timber, his handsome beauty takes you in. He has a unique look about him – long, light golden, flowing fur, a large blockhead a soft face, his are eyes warm and sincere.
When I met Timber, it was love at first sight. He bounced up to me in his unique way, raised himself up on his hind paws, put his arms around me, laid his head on my stomach and hugged me. I was hooked! He has a way of doing this to virtually everybody he meets.
From the moment that he walked into our house, it was as if he’d been there forever. He adapted and adjusted to his new friend Kirby and his new family and surroundings easily and seamlessly.
“Timby” has a kind, gentle and engaging demeanor with everyone. I have watched him flawlessly work his magical charms on visitors time and time again.  He leaves a lasting imprint on people. Because he has a way about him that makes you believe that you are the only one in the world, folks want to pet him, cuddle with him, and take him home. They find it almost impossible to tear themselves away from him and they can’t wait to come back and see him again and again.  Everyone, it seems, wants a dog just like him. We love him so much, in fact, that we now have one of his extraordinary puppies- Bernie!
Taking him to the Brookfield Market is especially fun. Timby is in his element there. A "Timby-less" trip to the market might take 30 minutes or so, but with Timber in tow, the time of that activity can easily be tripled or quadrupled. Everyone wants to stop, pet him and ask about him. He patiently drinks in the almost over the top adoration and attention for as long as it takes.  He is especially good with children of all ages.  He is a “people pooch” and barely seems to notice other dogs.
I also love walking him past the nearby Alterra Coffee Shop and watching the people sitting in the window stop whatever it is that they are doing and just watch and admire him. He is so engaging that, as we walk, people frequently stop to meet him and spend time with him.
In the presence of our other Golden Retrievers, Kirby and his (Timber’s) son Bernie (a 7 month old puppy), he is unflappable. While they play fight (almost constantly), he focuses his attention on you. Timber enjoys playfully chasing his progeny around our small yard. But, he doesn’t run…he floats! This is in keeping with calm demeanor and serene personality.  Never in a hurry, he does everything with placid enthusiasm. His gentle manner is existent even when he is around dogs that he is unfamiliar with.
Timber is so precious that he has quickly become my best pal. We eat breakfast together, watch games together, take evening walks, sleep together, and some times just hang out with one another. When I come home from a long day at work, he is waiting at the door for me, tolerantly and coolly waiting his turn while the other boys say hello. From that moment on, he rarely leaves my side. When he leaves to go to the “spa” in Menasha to make mini-Timby’s, the house seems terribly empty, less inviting and less homey.
We are so blessed to have Timber as a member of our family. He is gorgeous and engaging - warm and friendly. He was well trained by Deb and is a living, breathing, walking billboard for Harvestime Kennel and the great dogs that are bred there.