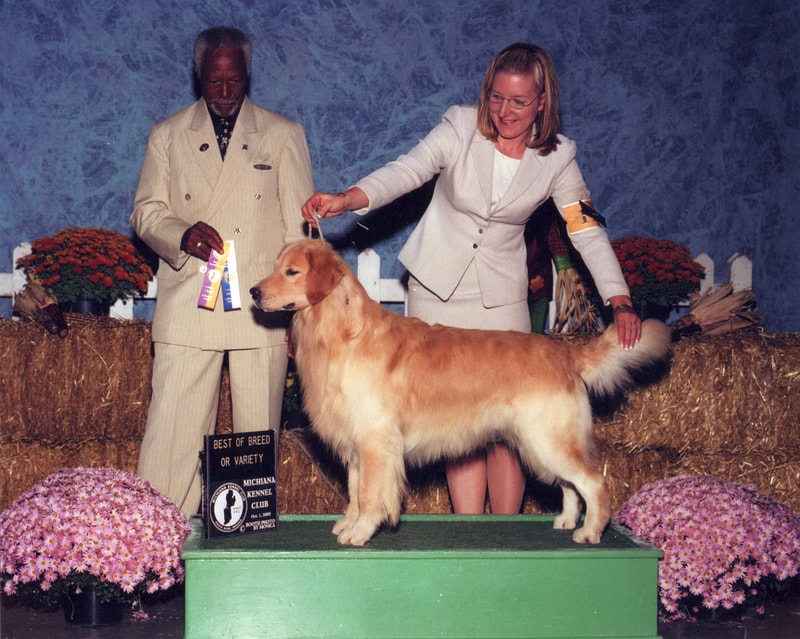 Clearances:
​CHIC# 22186
OFA (Hips): GR-86574G24F-PI (rated Good)
Elbows: GR-EL11539F24-PI (normal)
SAS (Heart): GR-CA8320/16F/C-PI (normal)
CERF (Eyes): GR-26996 (normal)
Fuzz is a light golden female out of my foundation dogs, Peaches and Tonka. She has a fairly straight, plush coat, a medium bone structure and weighs 58 pounds. She has a good bite, excellent pigment and a very pretty blocky head. Fuzz is structurally correct and is very muscular.
Fuzz is my top performance dog! She easily earned her CD Obedience title and breezed thru her two Rally titles. Fuzz loves to train and is eager to please. She has strong hunting instinct and loves the water and retrieving. This is a dog who can do it all! Her performance drive and trainability is evident in her pups! Fuzz’s claim to fame is that she can get three tennis balls in her mouth at once. Often she has at least two things she is carrying around!
Seven of Fuzz’s pups from previous litters are Service Dogs and are extremely easy to train. Two of her other pups had Rally and Obedience titles before they were 12 months! Our Zelda, Bounce,Faith, Lila (in Minneapolis at my daughter's) and Lucy (in Bozeman MT at my son's) are from Fuzz. Fuzz is grandma to Bliss, Joy and Glory.
Fuzz made her retirement home with the Landsverk family of Appleton. Here's what they have to say about her: "Our family adopted Fuzz in the fall of 2010. She was just retired, after having had her last litter in the summer. I was a little skeptical about adopting her at first, after all, she was already 7 years old. We had just put down our previous golden and I did not want the heartache of having another aging dog. Fuzz melted my worries away, nearly from day one. First of all, she's the most beautiful Golden Retriever that I ever laid eyes on. She has a gorgeous light golden coat and stunning dark chocolate eyes. And I have never seen such a focused dog in all my life! It doesn't matter what environment we are in; we could be at school with 50 kids surrounding her, or just playing in the backyard, and her eyes are attentive to me and what I might want her to do. It's just amazing---sometimes I feel like I have my own service dog. Fuzz loves to fetch tennis balls. we have since fostered another Golden from Harvestime Kennel, Mercy, and those two girls will fetch until the cows come home! Thankfully they both love to relax with the family during TV time, allowing us to pet and snuggle with them. They are truly a gift that our family will never take for granted!"