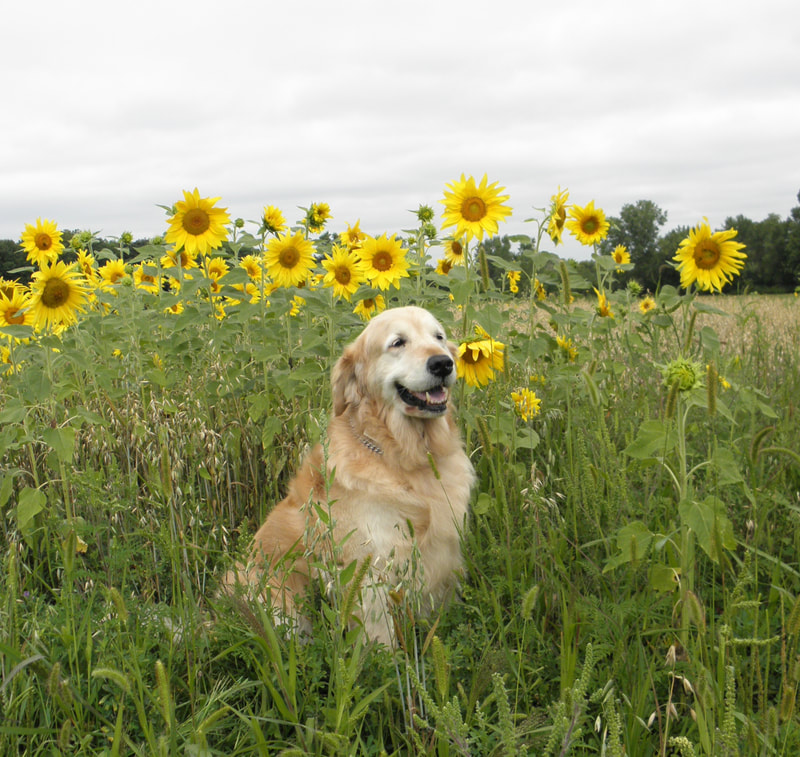 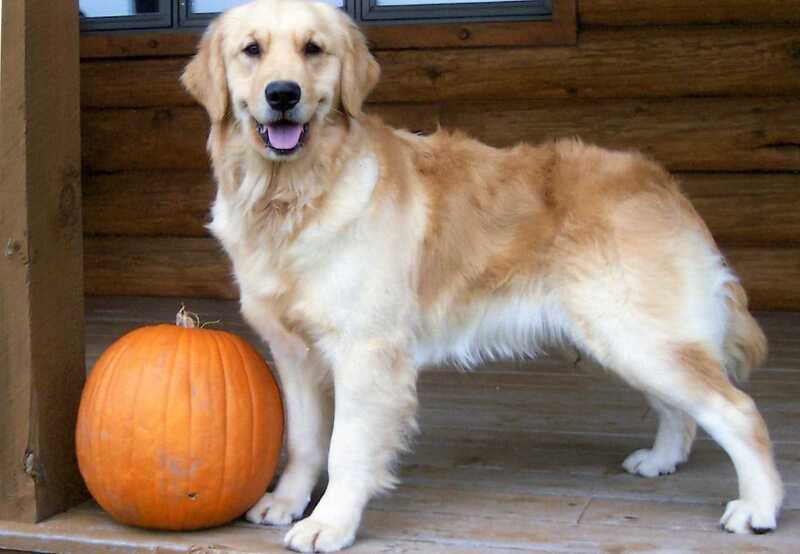 Dixie is a medium golden female. She has a straight, plush coat, a medium bone structure and weighs 54 pounds. She has a good bite, nice pigment and a very pretty, feminine head. Dixie has been in obedience and rally training and is an exceptionally smart dog.
Too smart actually, since we had to redo our kennel doors since she’s figured out how to open just about any door! She is definitely a “problem solver” dog. She has mastered the art of cracking any femur bone we give her by continually dropping them until they break open!
She earned her Companion Dog Obedience title, her Rally Novice title (coming in first place out of an entry of 45 dogs), Rally Advanced and her Canine Good Citizen! She has a softer personality and likes to run with the other dogs but lets them retrieve the balls while she gets some extra petting in. She loves to swim and be around people.
Dixie is retired and lives in Larson, Wisconsin with the Cole Family. This is what they write: "Dixie is our second dog from Deb.  Our 1stgolden, Abbey, was a puppy.  Abbey went through training classes all the way up to novice.  Once we felt she could ‘stay’ and ‘come’ and walk with us we felt our mission was accomplished to have a really wonderful & playful family dog.  When Abbey passed away at 10 yrs. old, Deb offered us Dixie in November 2008 who was 5 yrs. old on the condition that Deb would breed Dixie two more times.  Alright, we thought this could be interesting and our college aged daughter at that time missed Abbey as much as we did and the thought of getting a chance to play with puppies was a deal we couldn’t say no to.  We really love the light golden color of Deb’s dogs.  People always comment to us about how pretty they are.  Dixie is more mellow than Abbey was. Deb had trained Dixie and showed her in the competition ring.  Dixie obeys ALL the time and sleeps while we groom her, that’s amazing!  After Dixie was done with her second liter of pups she was officially sent into retirement.  We walk with her every day and she’s right nose to nose with you to help you put your shoes on  :).  Dixie is funny and entertaining.  She’s not very good at catching a ball or fizzbee but we keep throwing them for her anyway.  As she’s older she tires a bit early from play time but after all, she’s retired!!!"